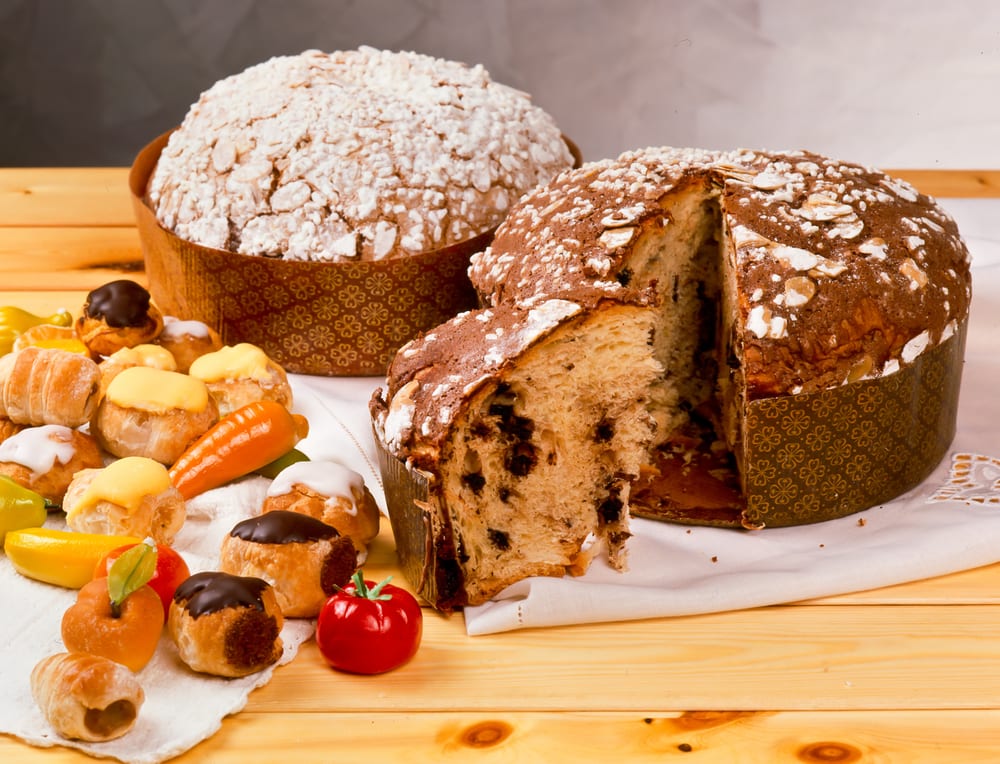 Italy boasts a dizzying variety of Christmas sweets—including lots and lots of holiday “breads.” Or so their names, which all include the word “pane” or “pan,” would make you think.

But they’re not all really breads. And they’re definitely not all the same. Here’s how to tell the difference between them! 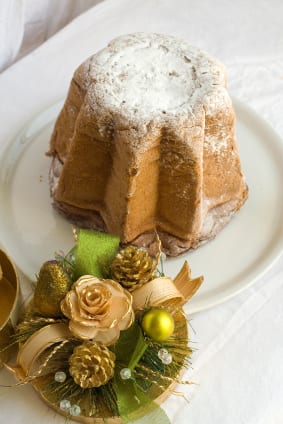 Pandoro, popular in Verona and Venice

Pandoro: This sweet Christmas bread from Verona is star-shaped and dusted with powdered sugar (some say to make it look like the nearby mountains). The name pan d’oro means “bread of gold,” and since white bread cost a lot in the Middle Ages and was consumed only by the wealthy, that’s exactly what this would have seemed like to the Veronese families who pinched pennies to enjoy this treat once a year! Today, you’ll sometimes see a hole cut in pandoro and filled with chantilly cream or gelato.

Pandolce: Meaning “sweet bread,” pandolce is the variety from Genova. Legend has it that the famed 16th-century Doge of Genova, Andrea Doria, invited Genovese chefs to submit recipes for a food that would represent the Republic’s wealth, as well as be nutritious, durable and suitable for long sea voyages—and so pandolce was born. It’s dense, crumbly, and filled with spices and candied fruits. According to tradition, a part of the pandolce should be set aside for the poor, while another should be kept for the feast day of St. Blaise on Feb. 3. 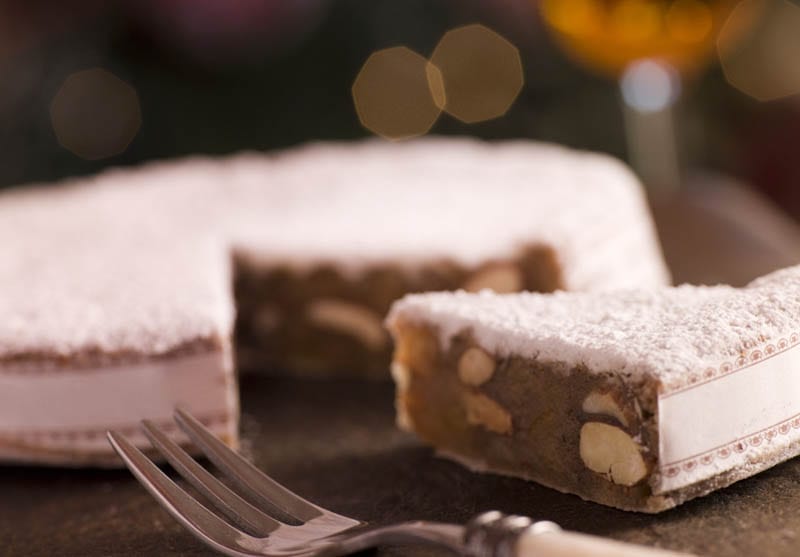 Panforte, a Christmas sweet from Siena

Panforte: Despite the name, this isn’t really a bread at all. Instead, it’s a chewy, dense fruitcake from Siena, heavily flavored with honey, cloves, coriander, cinnamon and white pepper. Thanks to its durability, Crusaders carried panforte with them on their quests. Records showing that cakes of panforte even were paid to Sienese monastery as a kind of tithe in 1205! 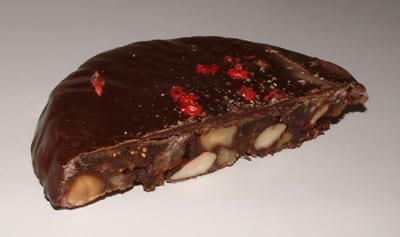 Panpepato (or pampepato): Not really a bread, either, panpepato (“spiced bread”) is a heavy gingerbread cake spiced with cloves, cinnamon, nutmeg, honey, nuts dark chocolate, and candied fruit. It dates back to 15th century Ferrara, although some say its origins are Tuscan, and the cake’s shape is supposed to look like a clergyman’s cap. In 1465, the first reference to panpepato showed up in writing in no less than a record book for the noble house of d’Esta, saying that the Duke gave his butler a gold ducat, telling him to put it inside the panpepato being served to the guests. 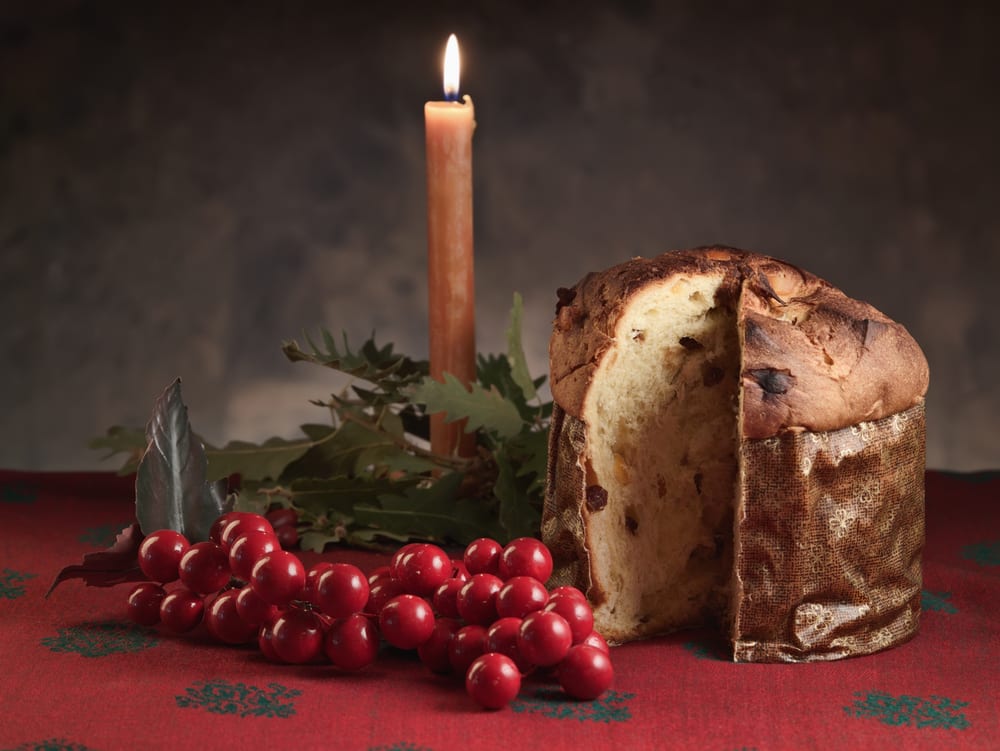 Panettone, one of the most famous Italian Christmas sweets

Panettone: Hailing from Milan, panettone is a sweet, dome-shaped bread loaf studded with raisins and candied citrus peels. Interestingly, the dough takes several days to make: Like sourdough, it has to be cured. Serve it up with either a hot beverage or a sweet wine like Moscato d’Asti.

Pangiallo: From Rome and the Lazio region, pangiallo, a golden yellow (giallo) bread filled with nuts, raisins, spices, and candied fruit (including lime peels), has ancient origins. Pagan Romans baked up pangiallo’s predecessor during the winter solstice as offerings to facilitate the sun’s return. The nuts, though, are a recent addition; previously, Romans used dried plum and apricot kernels instead, since nuts were simply too expensive.

Foods to Eat in Umbria and Tuscany

6 responses to “Italy’s 6 Sweet Christmas Breads: Panettone and Beyond”